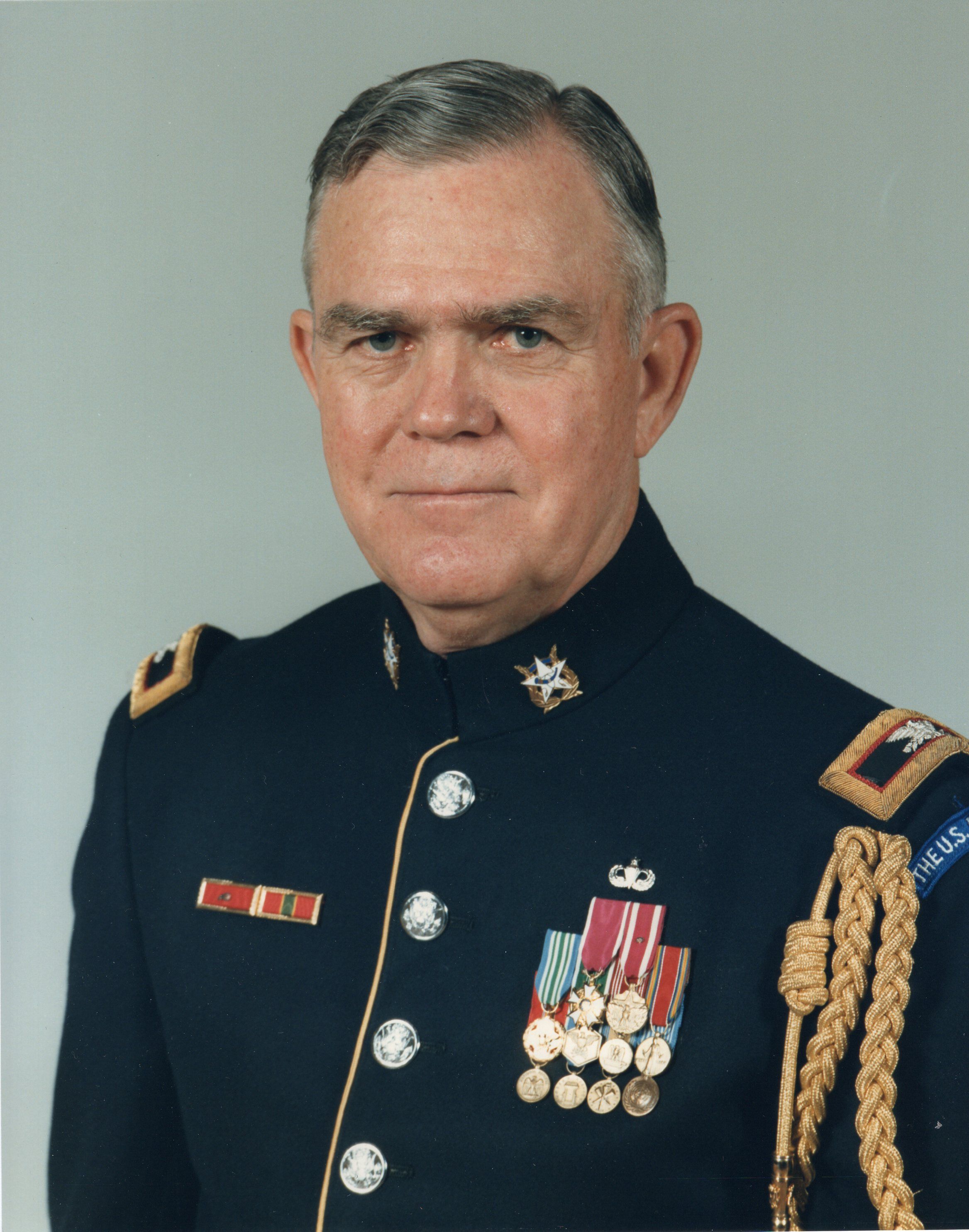 Colonel Eugene W. Allen embodied all that is best as a soldier, patriot, musician, citizen, husband, and father. In a military career that spanned 45 years of service to our nation, he rose through the enlisted and officer ranks to become the senior music director of the Armed Forces. He served in every type of position in the Army Band Program, to include duties as a performer, arranger, drum major, leader, commander, educator, and staff officer. In 1976 Colonel Allen reached the top of his profession when he was selected to be the fifth Leader and Commander of The United States Army Band (“Pershing’s Own”) in Washington, D.C., and he held that position until his retirement in 1990 when he was appointed Conductor Emeritus.

Our beloved father Gene was born in Morgan, TX, as the next to the youngest of twelve children in a musical family. His father was an energetic and strong-willed man who directed professional and school bands, taught private music lessons, and tended the family farm. His mother, a former schoolteacher and clarinet player, was a woman of strong faith who emphasized to her family the value of education and service to others. Gene’s personal values were based on the Protestant beliefs of that era and area which permeated their lives: respect for the rights of others, responsibility for one’s own actions, and the obligation that all should work and earn their own way.

All the Allen children learned to play an instrument, and young Gene was introduced to music at age seven when he began studying mellophone with his father. Trumpet became his primary instrument at age ten, and he enjoyed performing as a soloist and lead trumpeter in school and municipal bands in his local area. During middle and high school, Gene’s interests broadened to include athletics, engineering, and agriculture, but music remained his first love. He attended North Texas State Teachers College briefly as a music major until he received parental approval at age 17 to serve his country near the end of World War II.

Enlistment in the U.S. Coast Guard in 1945 marked the beginning of Gene’s military career. He was assigned as an Electronic Technician in St. Louis, MO, where he traveled throughout 26 states in the Southeast and Midwest to repair electronic equipment. After a short break in service, he began his Army musical service in 1948 at Fort Meade, MD, as a trumpet player with the renowned Army Ground Forces Band, now The United States Army Field Band and Soldiers’ Chorus. Following two years of extensive touring throughout the U.S. with that band, he transferred to the Second Army Band, also at Fort Meade, as solo cornetist and arranger. When the Korean War broke out, the band’s activities expanded to include a weekly television show in Baltimore, and Gene wrote three special arrangements each week for the band to perform on that show.

Gene was only 24 years old in 1951 when he received his first bandmaster assignment to organize and lead the 7th Hospital Band at the Valley Forge Army Hospital in Phoenixville, PA. The activities of this 14-piece band included an extensive entertainment program for patients who had returned from the Korean War. After that band deactivated, he was briefly assigned to the 289th Army Band in Japan before serving as Enlisted Bandleader of the 2nd Infantry Division Band in Korea and the 313th, 493rd, and 336th Army Bands at Fort Benning, GA.

Following his appointment as a Warrant Officer Bandmaster in 1958, Gene led the 101st Airborne Division Band at Fort Campbell, KY, and qualified as a master parachutist. He received a direct commission to Captain in 1961 and became the Staff Bands Officer at the Department of the Army in Washington, D.C., where he supervised all the Army’s Active, Reserve, and National Guard bands worldwide. He served as Associate Bandmaster and Executive Officer of The United States Military Academy Band at West Point, NY, and commanded the U.S. Army Element, School of Music at Little Creek, VA, before a second tour as the Department of the Army Staff Bands Officer. He was assigned to The United States Army Band in 1970 and served as its Associate Bandmaster and Executive Officer until he assumed command of the band in 1976.

As Commander of “Pershing’s Own,” Colonel Allen led and supervised The Army Band’s ensembles in more than 5,000 performances each year at the White House, the Pentagon, the U.S. Capitol, and Arlington National Cemetery; throughout the United States; and in Canada, the U.S. Virgin Islands, Japan, and Australia. They performed at many historical events of the 1970s and 1980s, such as welcoming Queen Elizabeth and Prince Philip to the White House; the July 4th Bicentennial concert for an audience of one million people at the Washington Monument; state funerals; and three presidential inaugurations. He conducted the band in our nation’s most well-known concert venues including Carnegie Hall, Radio City Music Hall, the Hatch Shell in Boston, and the Hollywood Bowl. Colonel Allen also served as advisor to the White House and the Department of State on national and international military music affairs.

At his retirement ceremony in 1990, Colonel Allen received the Army’s highest peacetime award, the Distinguished Service Medal. Additionally, he was called to the Oval Office where President George H. W. Bush thanked him for 20 years of support to the White House.

Throughout his career, Gene continued his professional development and studied trumpet with James Burke of the Goldman Band and Lloyd Geisler of the National Symphony Orchestra and studied conducting with Hugh Fiorato and arranging and orchestration with Mort Lindsay in New York City. He earned Bachelor of Science and Master of Arts degrees in music education from Teachers College, Columbia University.

As a composer, Colonel Allen wrote numerous songs, fanfares, solos, and marches which were usually inspired by a specific event or need. “A Salute to Veterans” is the official march of the Department of Veterans Affairs; “The Major of St. Lo” march was written for the 40th Anniversary of D-Day to honor the 29th Infantry Division; and “All the Way” is the official march of the 509th Airborne. He also composed songs to honor wives of general officers for whom he worked, including “Kitsy” for Mrs. William Westmoreland and “Carol’s Song” for Mrs. Edward C. Meyer. Colonel Allen’s achievements as an instrumentalist, conductor, composer, and arranger have been recognized by professional associations worldwide. He was a President of the American Bandmasters Association and a member of the Board of Directors for both The Midwest Clinic and the Association of Concert Bands. He was also awarded the prestigious Medal of Honor by The Midwest Clinic.

Soon after Gene was assigned to the Valley Forge Army Hospital, he met Claire Reno, a beautiful and charming woman who worked there as a secretary. It was love at first sight for both of them, and when they spent their first date listening to Alec Wilder recordings, Gene knew that Claire was the woman for him. Married in 1951, Gene and Claire raised a close-knit family of seven children that grew to include eight grandchildren and nine great-grandchildren. In 1985, Gene composed “You’re Always There” for Claire in honor of her selection as the District of Columbia Mother of the Year by American Mothers, Inc. After living in Northern Virginia for 46 years, Gene and Claire moved to Charlotte, NC, in 2014 to be closer to extended family. They were married for 63 years until Claire’s death in 2015. Their favorite activities were sailing their boat “Harmony” on the Potomac River; fishing and crabbing on the North Carolina Outer Banks where they owned a vacation cottage; traveling; visiting their children and grandchildren; and watching the Washington Football Team (formerly known as the Redskins) and Panthers games.

Gene encountered his biggest life challenge shortly after he retired from the Army when he began showing symptoms of a genetic neurological disorder, spinocerebellar ataxia. Although it led to a deterioration of his fine motor skills, a lack of coordination, and an inability to walk, Gene faced this disease with courage, strength, and resilience. He was admired and dearly loved by his family, friends, and caregivers for his positive fighting spirit.

To his family, Gene was Dad, Daddy, Pop, Grandpop. His life was guided by his love for God, family, country, military service, and music. He brought adventure to our lives as we moved with him to different duty stations, met new people, and experienced once-in-a-lifetime music performances and historical events. He taught us to value education and to develop a strong work ethic, and he cultivated in us a lifelong appreciation for music and teamwork by encouraging us to play an instrument and to play sports. He inspired in us a sense of service to others, whether it was through the military, teaching, or community service. He was a man with an abundance of integrity, talent, intelligence, energy, humor, and cherished smiles. We were blessed to accumulate a lifetime of memories with our father and will forever imagine his endearing sign-off in a soft Texas accent at the end of a phone conversation: “Bye now.”

A funeral service and burial at Arlington National Cemetery will be planned at a later date. Memorial gifts in honor of Colonel Allen may be made to Army Emergency Relief at 2530 Crystal Drive, Suite 13161, 13th Floor, Arlington, VA 22202, or online at https://give.armyemergencyrelief.org/default.aspx?tsid=12756.

Col. L. Bryan Shelburne, Jr., USA, Retired: I met Major Allen in about 1968. I was an Army personnel officer at Fort Eustis, Virginia with two ...
Fred McCall: I was a very nervous student at the SOM in 1968. I believe it was Maj Allen and he was the commander...
James A. Holtzclaw: Thanks very much for sharing this about your dad and your family. He clearly was an extraordinary m...
Paul Schultz: I will always think of the time in TUSAB, when COL Allen was the Leader and Commander as 'the good o...
Guy Zoller: Colonel Allen and his entire family have been my friends since I was about 14, and my parents were f...